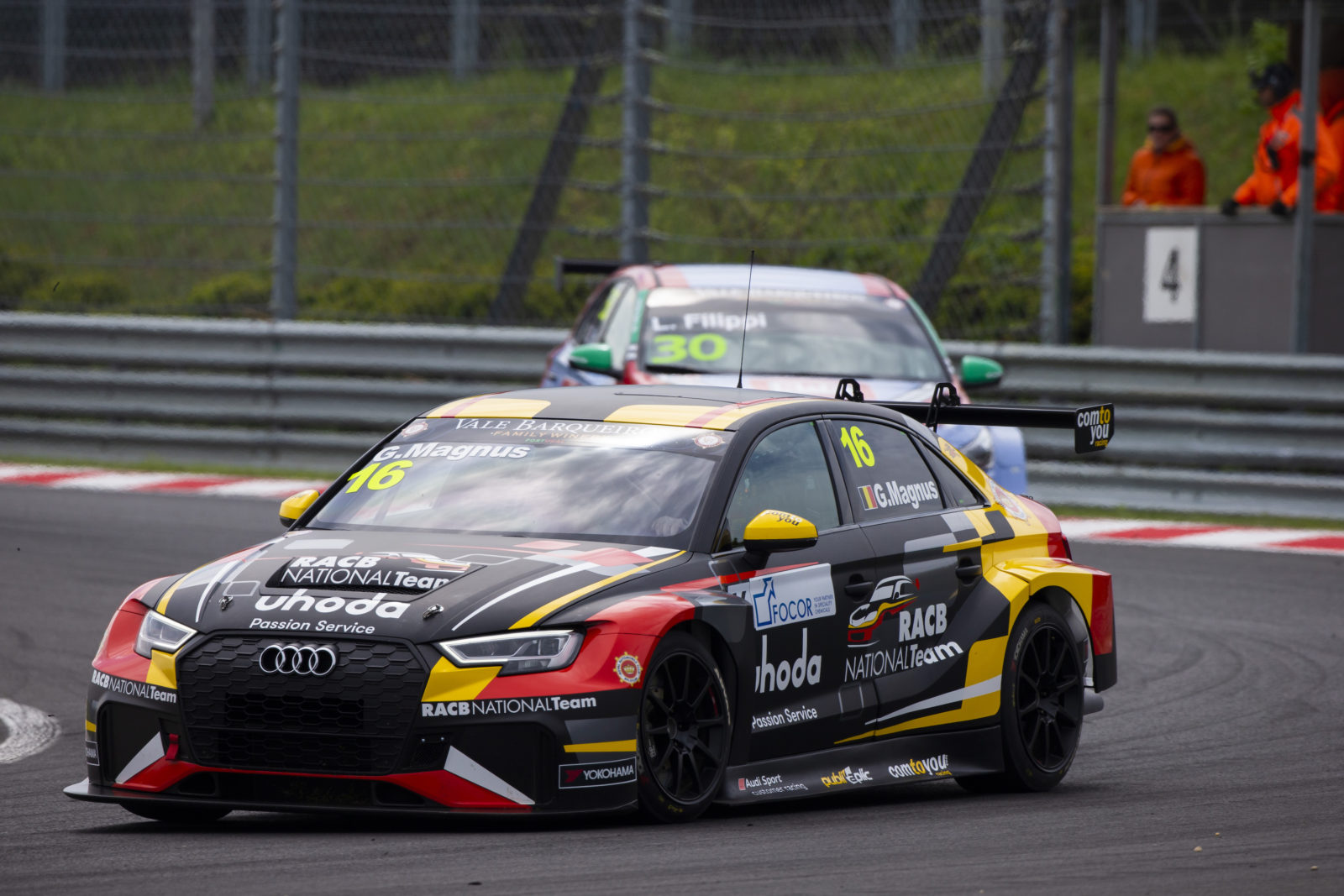 A cloudy sky and cool temperatures awaited the competitors of the TCR Benelux at the Hungaroring for the first event of the 2019 season. As part of TCR Europe, the Benelux drivers have constantly been at the top of the overall rankings. Against all the odds, debutant Gilles Magnus (Audi RS 3 LMS TCR – Comtoyou Racing) left Budapest in top spot ahead of two Autodis by Target drivers, Dusan Borković (Hyundai i30 N TCR) and Mat’o Homola (idem), the season’s first winner. Winner of a very spectacular Race 2, Julien Briché could only regret a penalty depriving him of important points at the end of the first race. The competition for drivers licensed in the Benelux or representing a Benelux team will continue at the end of May in Hockenheim.

Race 1: Homola from start to finish

Starting from pole position, Mat’o Homola led the first race of the TCR Benelux season from start to finish. The driver representing the Autodis by Target team did not have it all his own way against his team-mate Josh Files, who was particularly fast at the end of the race. “I knew I could not make a single mistake,” said the Slovak. “But this victory is vital for me. The confirmation of my participation came very late, for budget reasons, and I thank the Autodis by Target team for their confidence.” 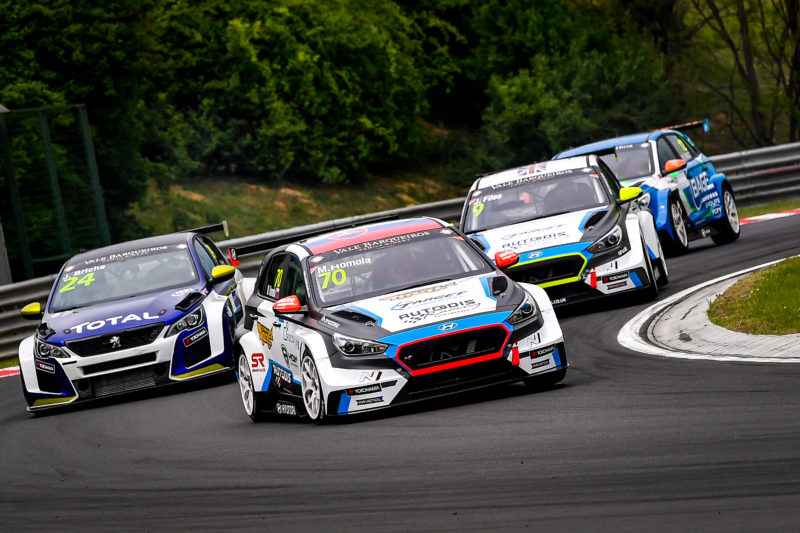 Behind the two Hyundai i30 N TCRs of the Luxembourg-licensed team, Julien Briché has long led the hunt. But while he thought he would score points for third place in the TCR Benelux ranking, the leader/driver of the JSB Competition team was disqualified after the finish, as his Peugeot 308 TCR was found to be under the regulatory weight. All of this was in favour of Dusan Borković who offered the treble to the Korean cars and Autodis.

This first confrontation was catastrophic for the WRT Team. At the start, Maxime Potty could not avoid the driver directly in front of him, who had stalled. The damage suffered by the VW Golf GTI was too severe and the Belgian retired, as did his team-mate Santiago Urrutia (Audi RS 3 LMS TCR), who was also the victim of contact during the first lap. As for Marie Baus-Coppens, a clutch problem on her Cupra Leon forced her to abandon.

Race 2: Briché king in the rain

A reversed qualifying Top 10 to form the starting grid and fine rain falling a few minutes before the start brought more than a pinch of spice to the second contest of the TCR Europe/TCR Benelux meeting at the Hungaroring.

Making his sense of balance speak for itself, Julien Briché was uncompromising in these conditions, taking the measure of Dusan Borković, who defended his position dearly. “It was indeed a battle with Dusan and we touched a few times, but I think it was OK despite everything,” said the Frenchman. “That is also what makes these touring car races so great and I think the spectators had a wonderful time!” 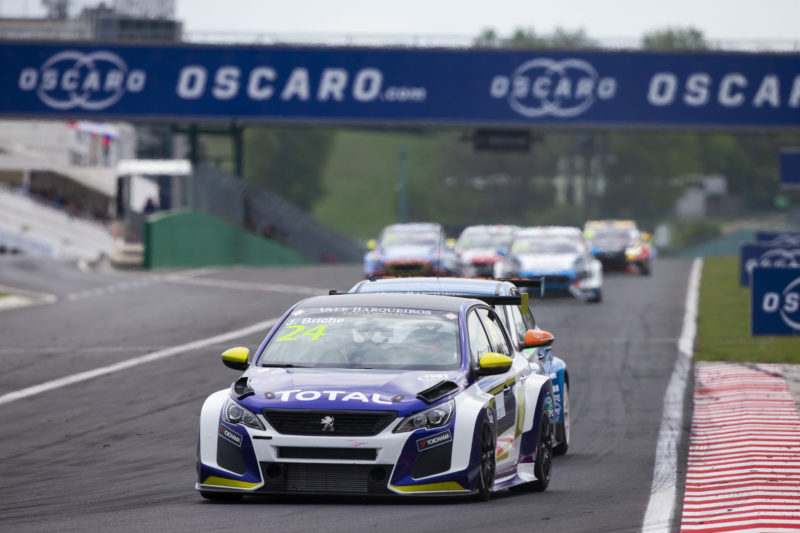 In the wake of the JSB Competition team’s Peugeot 308 TCR, another driver made a very strong impression: Gilles Magnus. While racing in Hungary for the first time in a touring car, the Antwerp native finished in an outstanding second place. “It was a completely unexpected result, especially on this track which is not the most suitable for our Audi RS 3 LMS,” smiled the RACB National Team driver, who jumped at the chance to take the wheel for this championship. “I seemed to adapt quickly, but I am already thinking about the next meeting in Hockenheim. After this great start, I want to confirm it in Germany!”

As in the first race, Dusan Borković (Hyundai i30 N TCR – Autodis by Target) completed the podium ahead of Santiago Urrutia (Audi RS 3 LMS – Team WRT), who started from pole position, and Stéphane Lémeret (Honda Civic TCR – Boutsen Ginion Racing), who made a very good fight-back allowing him to overtake Josh Files (Hyundai i30 N TCR – Autodis by Target) and Maxime Potty (VW Golf GTI TCR – Team WRT). Eighth in the Benelux rankings, Mat’o Homola was unable to confirm on a wet track what he had shown in the first race.

The next meeting of TCR Benelux is scheduled for 24-26 May in Hockenheim, also as part of TCR Europe. Will Gilles Magnus be able to confirm his leadership? This 2019 season promises to be an exciting one in any event!